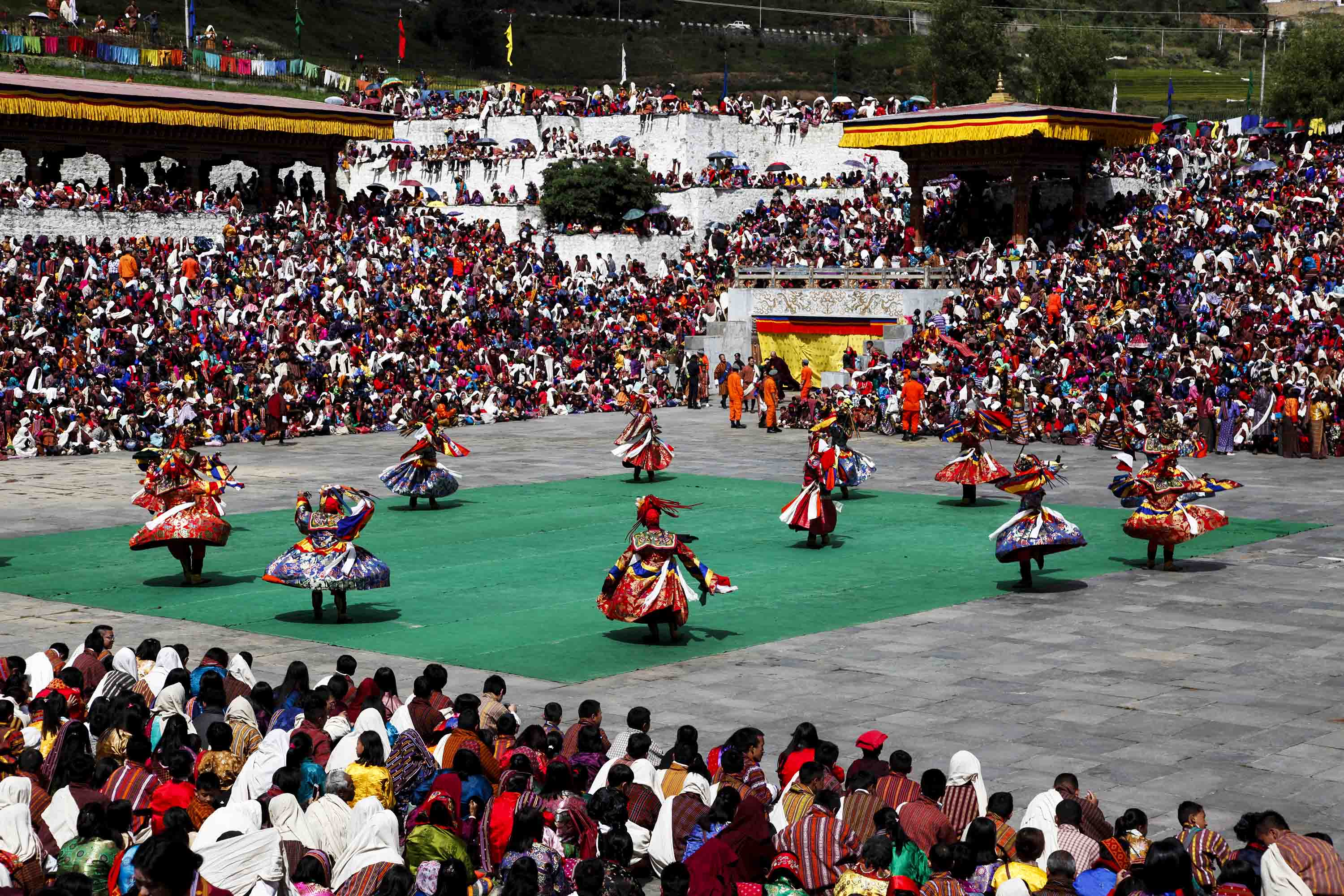 Add a little bit of indulgence to your exploration of Bhutan’s western valleys. Spend your days exploring the historical, cultural and scenic splendours of Paro, Thimphu and Punakha by luxury 4WD in the capable hands of our most experienced guide and driver. In the evenings you will return to your boutique accommodations with options including Taj Tashi, Amankora, Uma Paro, Uma Punakha, ZhiwaLing and Bhutan Spirit Sanctuary to experience their first class service and luxurious facilties including massage, spa, wellbeing therapies, pool and fine dining. We can organise a range of add-on experiences to really create a tour to remember such as a private dinner and culture show, a tradtional private tented lunch, and an audience with a Rinpoche (if available). All of these options can easily be tailored to suit your level of luxury

The flight to Paro is one of the most spectacular mountain flights in the world, with a constantly changing panorama of some of the highest mountains on earth. This beautiful valley is home to many of Bhutan’s oldest monasteries and temples, and the country’s only International airport. Our Representative from Bhutan Everest Tours & Treks will receive you at the airport and drive you to the Hotel.

After lunch enjoy afternoon sightseeing around Paro transported by luxury 4WD, including a visit to the Ta Dzong Museum housing many religious relics, works of art and handicrafts offering a great orientation into Bhutan’s historical, cultural, and religious past. Next, visit the Rimpong Dzong to see the painting of the great saint Milarepa, considered as the master of meditation by the Bhutanese and believed to have attained enlightenment in a lifetime. Dzongs are large monasteries and district administrative centers, which were once strategic forts.

Dinner and overnight stay at a hotel in Thimphu.

Other options for the day include a hike to Tango and Cheri Monasteries (45 mins), two of the most ancient monasteries in the Thimphu region or a hike to Phajoding Monastery providing a splendid view of the valley.

Return to Thimphu for dinner and overnight.

After breakfast, drive to Punakha. On the way to Punakha, halt in Dochu-La Pass (3140 m) for photography. Visit Royal Botanical Park at LamPelri. Upon reaching Lobesa, visit Chimi Lhakhang – dedicated to Lama Drukpa Kuenley also known as “Divine Madman”. We halt in Lobesa town for Lunch.

After lunch, visit to Punakha Dzong – Built in 1637, by Zhabdrung Ngawang Namgyal to serve as the religious and administrative center of the region.

Dinner and overnight halt at a hotel in Punakha.

After breakfast visit Khamsum Yulley Namgyal Chorten which is located on the ridge above the Punakha Valley. It’s a unique Buddhist monastery of Bhutan. Overlooking the beautiful country side Khamsum Yulley Namgyal Chorten was built in 1990. Under the instruction of the Queen Mother. It was dedicated for the Dragon king and for the well-being of the scenic kingdom of Bhutan. After lunch visit Talo Monastery, which is approximately one hour drive from Punakha and situated at an elevation of 2800 m. Talo Monastery is a Buddhist monastery located in the hills above Punakha, Bhutan.

After breakfast drive to Paro via Thimphu. On the way to Paro visit Tachogang Lhakhang. Take you the thrilling experience of walking the suspension bridge that leads to the Temple. Make your last stop as memorable as ever as you take this short walk up to the Temple located on a hill top adjacent to Paro highway.

After lunch visit, Kyichu Lhakhang. Kyichu Lhakhang is one of Bhutan’s oldest and most beautiful temples. The temple is popularly believed to have been built in 659 by King Songtsen Gampo of Tibet, to pin down the left foot of a giant ogress who was thwarting the establishment of Buddhism in Tibet.

Dinner and overnight at hotel in Puankha .

After breakfast hike to Taktsang Monastery. The trail is broad and the walk of approximately 2 hours uphill takes you almost a kilometre above the Paro valley floor (for those who cannot hike we will arrange a horse for transfer up to the viewing point). The view of Taktsang Monastery built on a sheer cliff face 900 metres above the valley floor is a spectacular sight. The Monastery is also an important pilgrim site for the Buddhists. The great Guru Rimpoche is said to have flown here on the back of a tigress when he brought the teachings of the Buddhist Dharma to Bhutan in the 8th Century. He then mediated in a cave there for three months where the monastery was later built. Refreshments and lunch will be arranged in the tent specifically pitched on the path to Taktsang Monastery.

On the return drive to Paro, visit 7th Century Kyichu Lhakhang, one of the 108 temples constructed by the Tibetan king Songtsen Gampo. Afternoon is at leisure with the option of resting in the beautiful surrounding grounds, or enjoying an optional Spa Treatment (subject to availability).

Day 7: Paro
After breakfast drive to the airport for flight to your onward destination.