Thimphu Tshechu is one of the biggest festivals in the country which is held in the capital city for three days. Tsechu is a religious festival and by attending it, it is believed one gains merits and because of that reason Tshechu is witnessed by thousands of people including both local and tourists. It is also a yearly social gathering where the people gather to rejoice, dressed in finery. In order that Bhutan can rejoice in continued happiness, many learned lamas established the tradition of these dances.  The actual Tshechu is preceded by days and nights of prayer and rituals to invoke the gods. The mask dances known as chams or folk dances like the Guru Tshengye (Eight Manifestations of Guru Rinpoche), Shaw Shachi (Dance of the Stags) and many more are performed by both monks and common men to bless the onlookers, to protect them from misfortune and to exorcise all evil. Thimphu Tsechu holds spiritual significance to the people who crowd the streets of Thimphu during this time of the year.

The annual Black-Necked Crane festival is celebrated at the courtyard of Gangtey Goenpa in Phobjikha valley. The festival is an occasion for the locals to rejoice and celebrate the arrival of this endangered and majestic bird which becomes an inseparable part in their daily lives during the winter months. The annual blacknecked crane festival is organized to generate awareness and understanding on the importance of conserving the endangered Black-Necked Cranes. The festival includes cultural programs such as folk songs and dances (some with black-necked crane themes) and mask dances performed by the local people, crane dances and environmental conservation-themed dramas and songs by school children.

The Punakha Tshechu is one of the most popular Tshechus in the nation. It is held directly after the well known Punakha Drubchen. The spreading out of the thongdrol a large tapestry of Guru Rimpoche is the primary fascination of the festival. It is trusted that a mere sight of the thongdrol liberates an onlooker and cleanses him of his sins. Punakha Tshechu, as all Tshechu festivals, respects Padmasambhawa, also called Guru Rimpoche, the precious yogi and holy person who is credited with having presented Tantric Buddhism all through the Himalayas. The festival’s masked dances are performed by priests clad in beautiful brocade clothing and pervaded by serenades and reading of Buddhist scripts.

The climax of celebration constitutes the unfurling of a huge cloth thangka, a hallowed parchment, delineating Padmasmabhawa and symbolism from Buddhist pantheon. It is held in the grounds of the wonderful Punakha Dzong. The local people assembles in a soul of merriment and commended the celebration with profound confidence to witness unique masked dances and celebrations. The Tsechu is outstanding amongst other approaches to encounter the living culture of Bhutan. Punakha Tshechu was introduced in 2005 accordingly with the solicitations made by Punakha District Administration and nearby individuals to have a Tshechu so as to better protect Buddhist lessons and keep alive the honorable deeds of Zhabdrung Rimpoche.

One of the biggest festivals in the country is the Thimphu Tshechu. This festival is held in the capital city for three days. The Tshechu is witnessed by thousands of people, both local and tourists. The actual Tshechu is preceded by days and nights of prayer and rituals to invoke the gods. Mask dances like the Guru Tshengye (Eight Manifestations of Guru Rinpoche), Shaw Shachi (Dance of the Stags) and many more are performed. 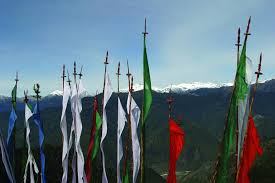